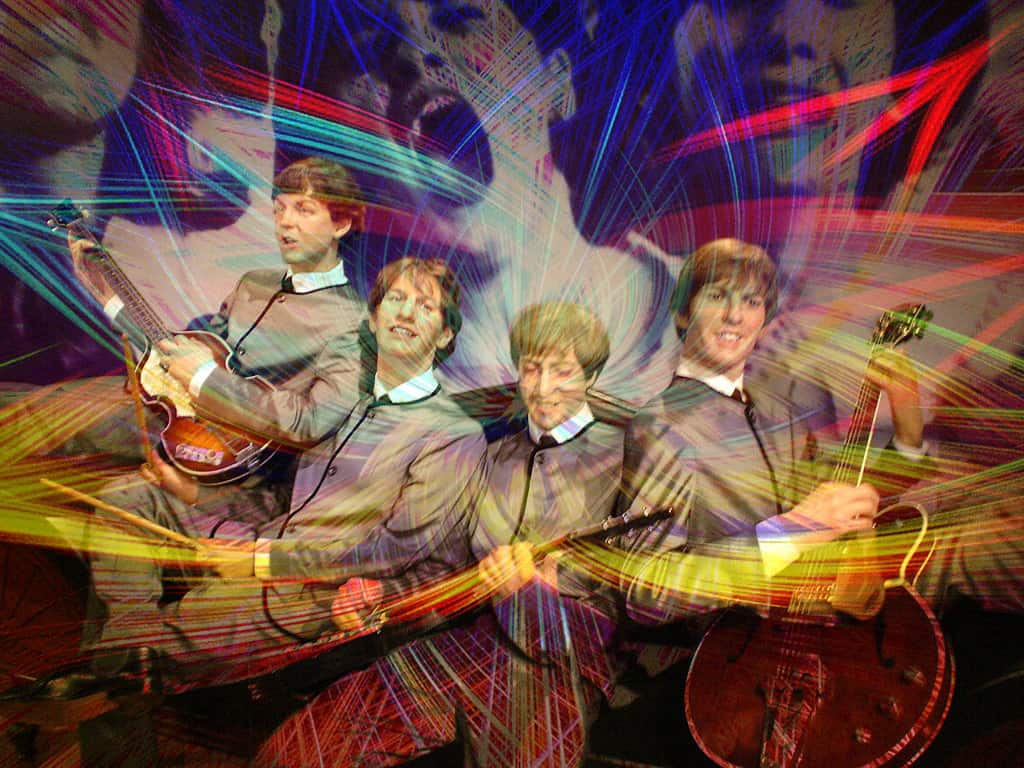 The Beatles are one of the most popular and well-known bands in the world. They’re renowned for their music, which changed the face of the industry, if not the world, and are often touted as being the first band to produce psychedelic rock.

But how much of this is true? And how much of the Beatles’ work was actually fueled by drugs? And, furthermore, for a culture that prides itself on being so thoroughly anti-drug, how is it that a band best known for its rampant drug use contends for being the most popular of the century?

These questions, and more, we aim to answer in this article describing the Beatles and their relationship with LSD or, as they called it, Lucy in the Sky with Diamonds.

Quick FAQ About the Beatles & Drug Use

Before we go into more detail about the Beatles and their fascinating, drug-addled history, we’ll give some quick pointer answers to some of the most common questions asked about the group.

How did psychedelics influence the Beatles?

The Beatles were no strangers to drugs during the early years of their work. They had ample time to get to know drugs that were common at the time such as cocaine and marijuana. but it wasn’t until they experimented with LSD that their music, appearance, and overall approach changed completely.

Their experience with LSD led them to becoming influential icons of the counterculture movement, which leads us into our next question.

How did the Beatles influence the hippie movement?

The Beatles had a huge influence on the hippie movement. Their music and personas encouraged free expression and their lyrics promoted the essential components of the counterculture movement: free love, sex, and music.

Lennon inspired a lot of the counterculture’s rebellious thinking by including in his lyrics his views on the decaying state of capitalist culture. His refusal to change his views and his continued decision to express them is, some speculate, the reason he was killed.

Did the Beatles invent psychedelic rock? 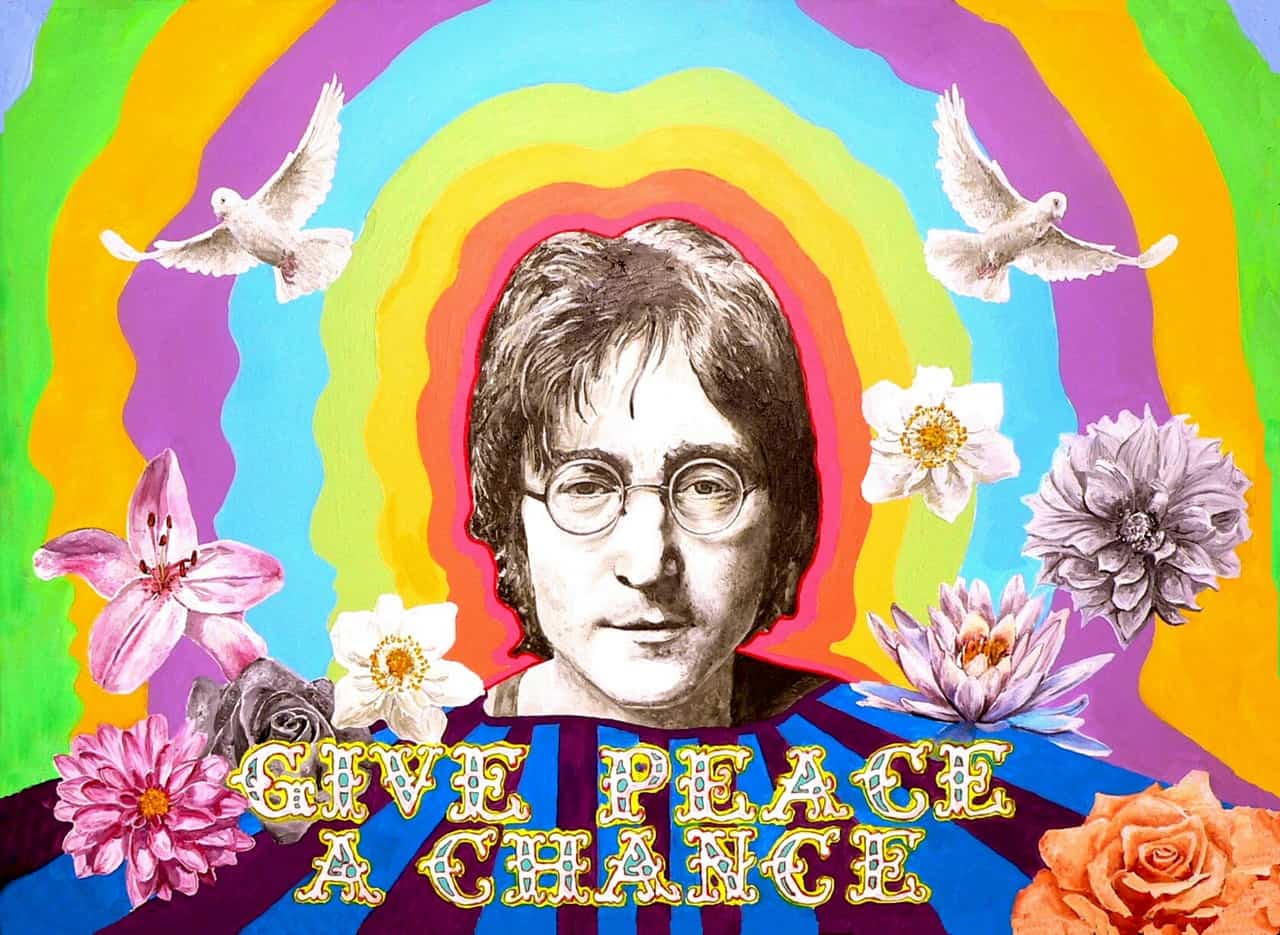 It’s hard, if not impossible, to decide how and when any artist ‘invented’ a genre. The Beatles certainly had some of the strongest and most influential work as pioneers in the psychedelic rock genre, however, and were likely the strongest icons for making it popular.

However, some other bands were also working with the genre around the same time. Eight Miles High, by the Byrds, was recorded about 4 months before the Beatles recorded their first song, Rain. Many people consider Eight Miles High to be the first proper psychedelic song that fit neatly into the psychedelic rock genre.

13th Floor Elevators was another band that did some work early on in the niche. They were the first to advertise their music as psychedelic rock and did so much before the Beatles did.

Who were the Beatles?

Beatles fans will know the names of the band members by heart. In fact, even non-Beatles fans are probably familiar with the most prolific members, such as John Lennon and Ringo Starr.

However, nobody was born famous, and the Beatles certainly didn’t waltz into the world with rampant drug addictions and a powerful influence. They hailed from Liverpool, a town that was far from wealthy and most likely familiar in name only because the Beatles made it somewhat famous.

The first meeting of two Beatles members occurred in 1957 when John Lennon met Paul McCartney. John was playing with a skiffle band called the Quarrymen and the band’s leader had invited Paul McCartney to join in on a few songs.

After McCartney became a band regular, he found that he lacked the confidence to be the focus of the band while playing solos. In search of another guitarist to fill the void, the Quarrymen invited George Harrison to join.

It wasn’t until a few years later, after the three members had recognized their incredible synergy and decided to name their own troupe by combining the words beat and beetles, hence The Beatles, that they recruited Ringo Starr as their drummer.

After his first gig, replacing the then-current drummer Pete Best, fans of Best swarmed Starr after the gig and thrashed him up a bit. They exacted their vengeance but at the same time solidified Starr’s role in the band as the true fans came together.

How Did Psychedelics Influence the Beatles?

It is said that the two Beatles who were first introduced to acid experienced its wonders at a party in the spring of 1965 – and that they didn’t do it on purpose. John Riley, known by history as the “Demon Dentist,” allegedly spiked John Lennon and George Harrison that fateful night.

Prior to this party, the Beatles had done plenty of experimenting with drugs. They were familiar with cocaine and marijuana, but it wasn’t until they explored LSD that their style, skills, and approach to music and life, in general, took a serious turn.

They were given the LSD in an innocent cup of coffee. The Demon Dentist, ethics aside, was committing no crime at the time since LSD had not yet been made illegal. Nowadays one might write someone off as a lunatic for spiking someone’s drink with acid, but in the sixties, perhaps the general vibe of the culture and the intimacy and mutual support shared amongst members of the counterculture made it easier for psychonauts, both new and old, to embrace their psychedelic experiences without falling into a bad trip.

It was a couple of months later before they were able to take LSD again. Their second trip was taken while they were resting during a hectic and exhausting tour through the United States. This time, three of the Beatles partook in the drug, with only McCartney refusing to join.

The Byrds, who are attributed with creating the genre of psychedelic rock nearly as often as the Beatles, were present during this trip. The dreamlike hallucinogenic bonding shared by the musicians during this prolific experience undoubtedly cemented itself into the psyches of the Beatles, as their music was forever changed.

The change that their tunes took can be perhaps best heard in Revolver and Sgt. Pepper. One might pay special attention to Lennon’s song, “She Said She Said,” on Revolver, which was entirely inspired by the trip that they shared this night.

In either case, they decided that LSD trips need not be so infrequent and began to use the stuff on a regular basis.

LSD, the Beatles & the Press

Despite their increasing popularity, the regular use of LSD seemed to make the Beatles more humble and honest with the press. This came as both a blessing and a curse: their honesty about their psychedelic use completely shifted their image and the public’s opinion.

McCartney – the last member of the band to begin using LSD – told a news reporter in all honesty that he partook in LSD on a regular basis. He mentioned this alongside his thoughts on the substance and how it helped to promote mindfulness, expansion and freedom, and how it seemed to provide a seemingly endless source of creativity.

This is in stark contrast to the way that famous bands typically try to define an image for themselves and maintain it. The Beatles, who were renowned for being clean-cut and proper, were now seen as edgy, rebellious, and a menace to society.

“I never felt any responsibility,” said Lennon during a 1967 interview, commenting on how he was just a person and that he didn’t necessarily want or approve of his status, “being a so-called idol… [people are] putting their responsibilities on us. Paul said to the newspapers… he admitted taking LSD. If they were genuinely worried about people copying, they should have been responsible and not printed it.”

Paul’s point rings true and suggests that, even back then, the media was more concerned about riling up the public’s opinion than producing pieces that could create the best possible change in society. The Beatles simply wanted the freedom to be themselves, and so that’s what they did, public opinion be damned.

The Beatles made sure to break away from the conventions of the era by bringing about a new sound. They did this by using interesting and exotic sounds and samples, foreign scales, and other interesting tools and techniques to create a musical blend that was unlike anything else available.

Harrison’s interest in Eastern cultures, for example, led to the creation of “Within You Without You,” a song that showcased the band’s versatility. Nowadays, hearing a song with Indian samples is nothing special but in the seventies, this was something to write home about.

On the one hand, their freedom of expression helped to fuel the counterculture movement and the rampant self-expression that the period is known for. On the other hand, their carefree combination of asynchronous rhythms, sounds, and convoluted lyrics often led to music that was unintelligible to the average (or sober) listener.

As they became aware of their influence, the Beatles put more effort into building upon the style that they’d developed. They wanted to help push the counterculture movement to new heights, and they accomplished this in waves. John Lennon helped to keep the movement educated by intertwining his political knowledge and understanding of societal issues such as social divison and conflict into the lyrics of his songs.

Their music became a crucial part of a global shift in consciousness. Nowhere can this be better seen than in their two albums, Revolver and Sgt. Pepper.

“Tomorrow Never Knows,” one of their most esoteric songs, borrows lyrics from the book “The Psychedelic Experience,” written by Richard Alpert and Harvard-professor-turned-ravenous-psychedelic-advocate Timothy Leary

The book itself was an attempt to rework the Tibetan Book of the Dead, a veritable bible to aspiring Buddhist hippies that dealt with the intermediate stages between death and rebirth. It’s basically a textbook on how to navigate post-mortem reality, a complicated read that requires immense dedication to really comprehend. Thus we see that the Beatles were more than just a bunch of high kids: they were an icon that represented a cataclysmic shift in human thought.

What Songs Did the Beatles Write on Acid?

Unswayed by the public’s changing opinion, the Beatles continued to do what any self-respecting people would do: whatever they felt like doing. For them, this meant dropping lots of acid, writing lots of songs, and playing lots of shows.

“She Said She Said,” as mentioned earlier, was inspired by the Beatles’ second acid trip. It was shared with a number of prolific musicians and artists including actor Peter Fonda, who told the group multiple times about his near-death experience.

“Lucy in the Sky With Diamonds” is perhaps the most obvious acid song written by the Beatles, although according to Lennon the song isn’t actually related to LSD at all. He says that his son came up with the name for the song’s title. But unless his son is a master of clever acronyms this might have been a joke on Lennon’s part.

“I Am the Walrus” is a song that has been the subject of a lot of interpretation. The final conclusion will one day, most likely, be that nobody ever knew what anyone was talking about during the writing of this song or the months surrounding it. According to Lennon, the walrus was allegedly Paul – or more accurately, the Paulrus – and the Paulrus never expected that he would be the subject of the Beates’ most famous song.

Final Thoughts on the Beatles & Psychedelics

The Beatles will be forever known as one of the most influential bands of the hippie era, if not the whole century. Their music helped to shape the personality of an entire generation. And their music was shaped, in no small part, by psychedelic drugs.

PrevPreviousWhy Was David Nutt Fired?
NextPsychedelic Stocks: The Investment of the FutureNext